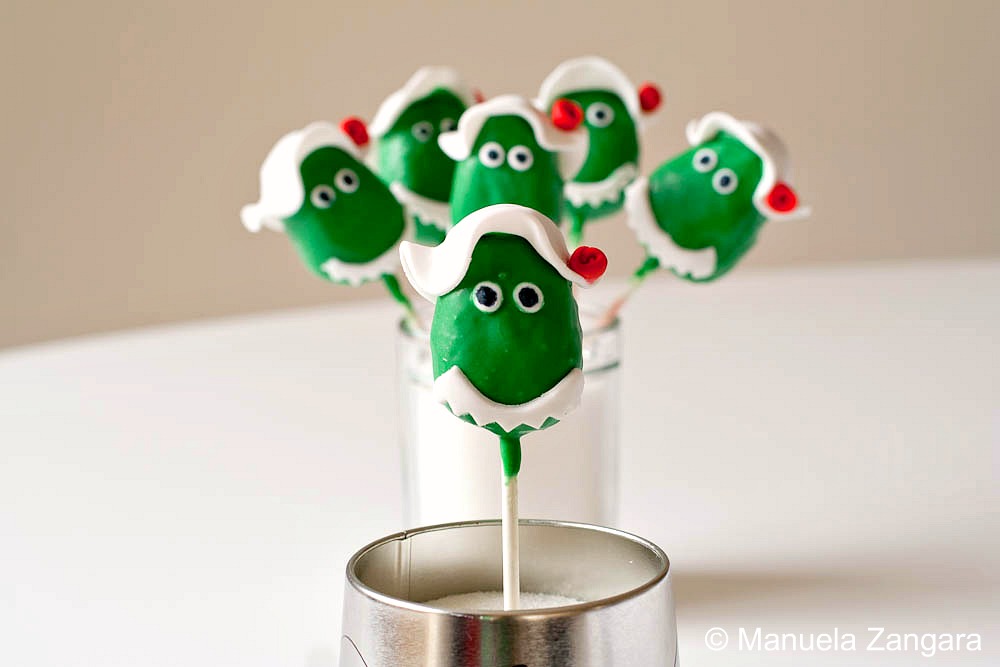 After making Hello Kitty cake pops for my elder daughter’s birthday in July, I knew I had to do something similar for the youngest one when she turned 2!  As she loves Dorothy the Dinosaur, we chose it as a theme for her party.  So, Dorothy the Dinosaur cake pops were the obvious choice!   And they were not too hard to make either.

I had not seen any on the web, so I “designed” them completely by myself.  The hardest part was to figure out a way to make Dorothy’s teeth… but in the end, I decided to use fondant to decorate the cake pops, and I think it was a very good idea as it allowed me to make more precise and realistic shapes for the teeth, the hat and the rose.

Make the cake pop mix and shape into ovals (with one end slightly thinner than the other) to make Dorothy’s face. 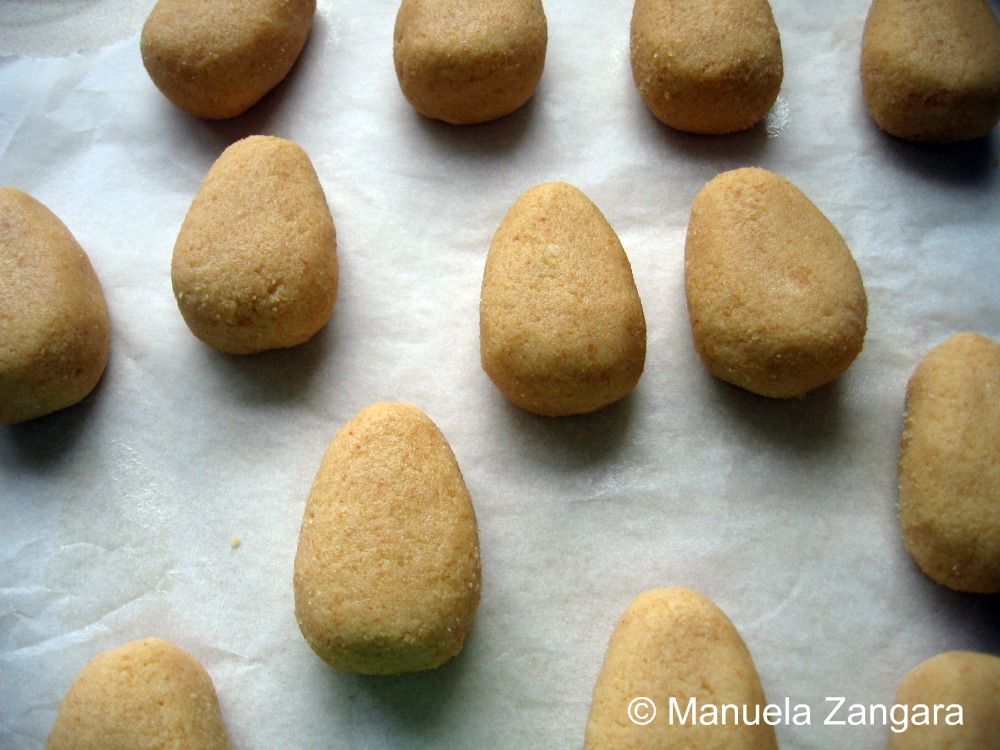 Put the cake pops on baking paper.  Keep them in the freezer for 15 minutes and start preparing the candy coating.

Melt it following the instructions on the package (I microwave them as I find it easier).  Also make sure you use a deep enough plastic container to melt the candy so you can dip the candy pops in it.

When ready, take all the ovals out of the freezer and put them in the fridge.  Keep only 5 on the benchtop and start working with these.  Take a pop stick and dip it in the candy melt (2 cm).  Insert it in the cake pops no more than halfway through and keep it aside.  Do that for all 5 pops.  Then take the first cake pop and dip it into the candy melt.  Make sure it is fully submerged and that the candy coats the stick.  Then pull it out in one movement and remove the excess coating by tapping the left hand on your right wrist and turning the pop at the same time so that the coating gets evenly distributed.

Then put it vertically on a piece of Styrofoam to dry.

When dry, you can decorate Dorothy’s face.

To make the hat, roll out some white fondant into a very thin sheet and cut out a circle.  Attach it on Dorothy’s head (on the thinner side) using a little candy melt.  Shape it with your hands and let it dry on the Styrofoam. 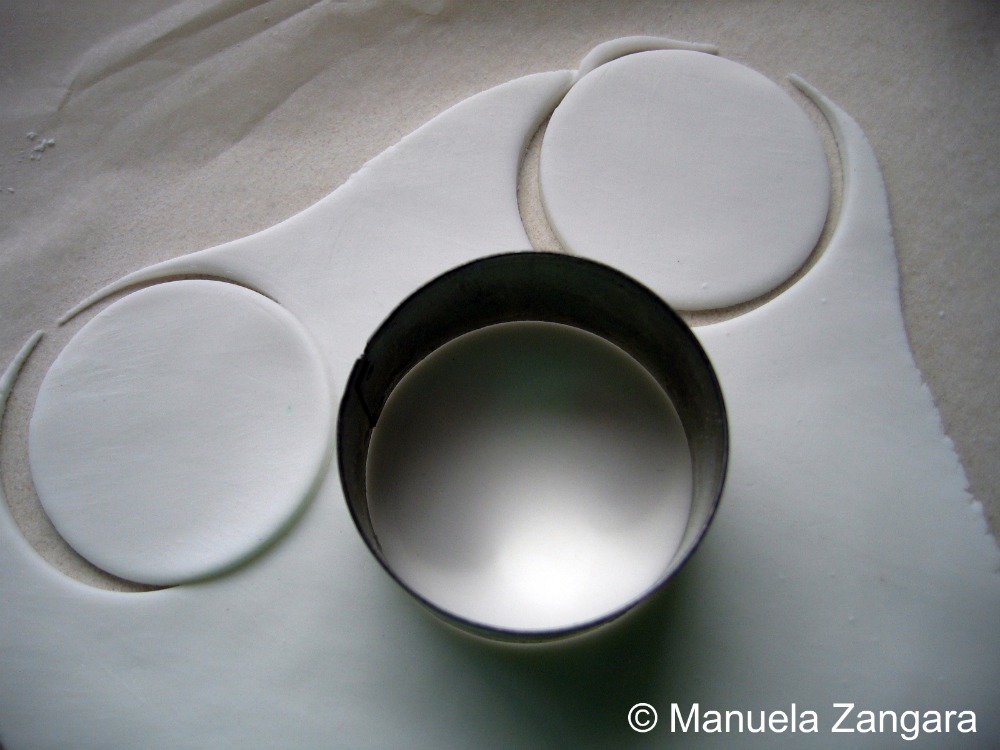 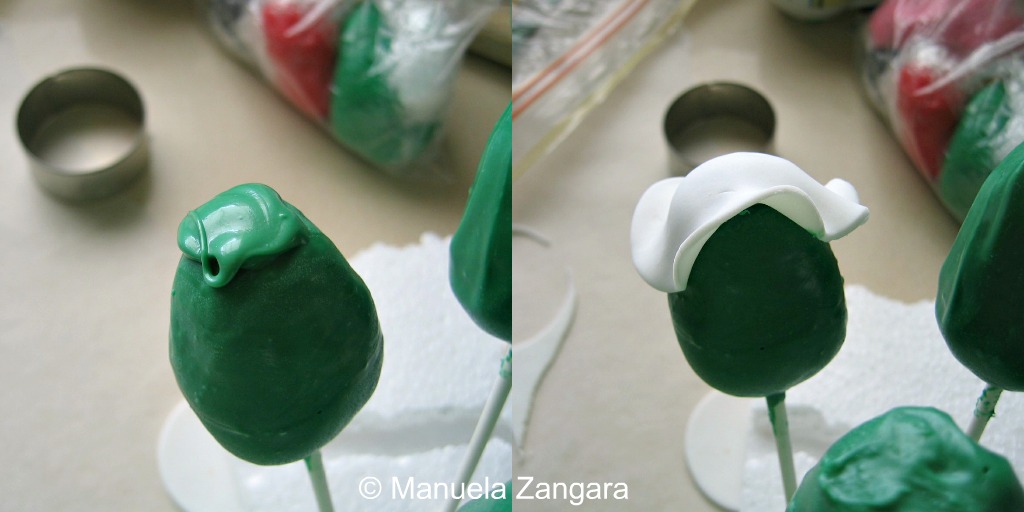 Cut out Dorothy’s teeth using a pasta cutter and attach them using a little candy melt. 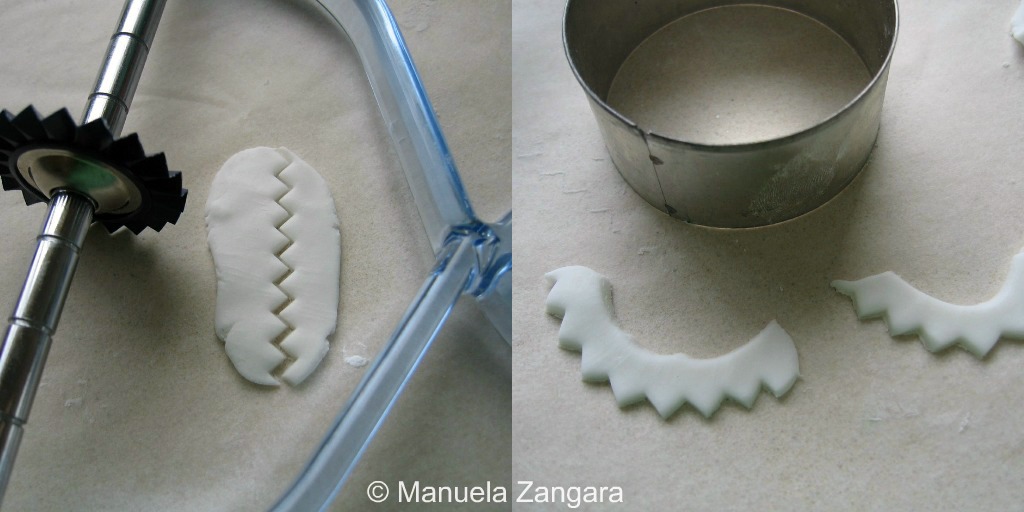 Do the same thing for the eyes and then draw the pupils using a Black Edible Ink Pen.

Now take a small piece of red fondant and roll it into a thin strip.  Fold it on itself and then roll it to create a “ribbon rose”. 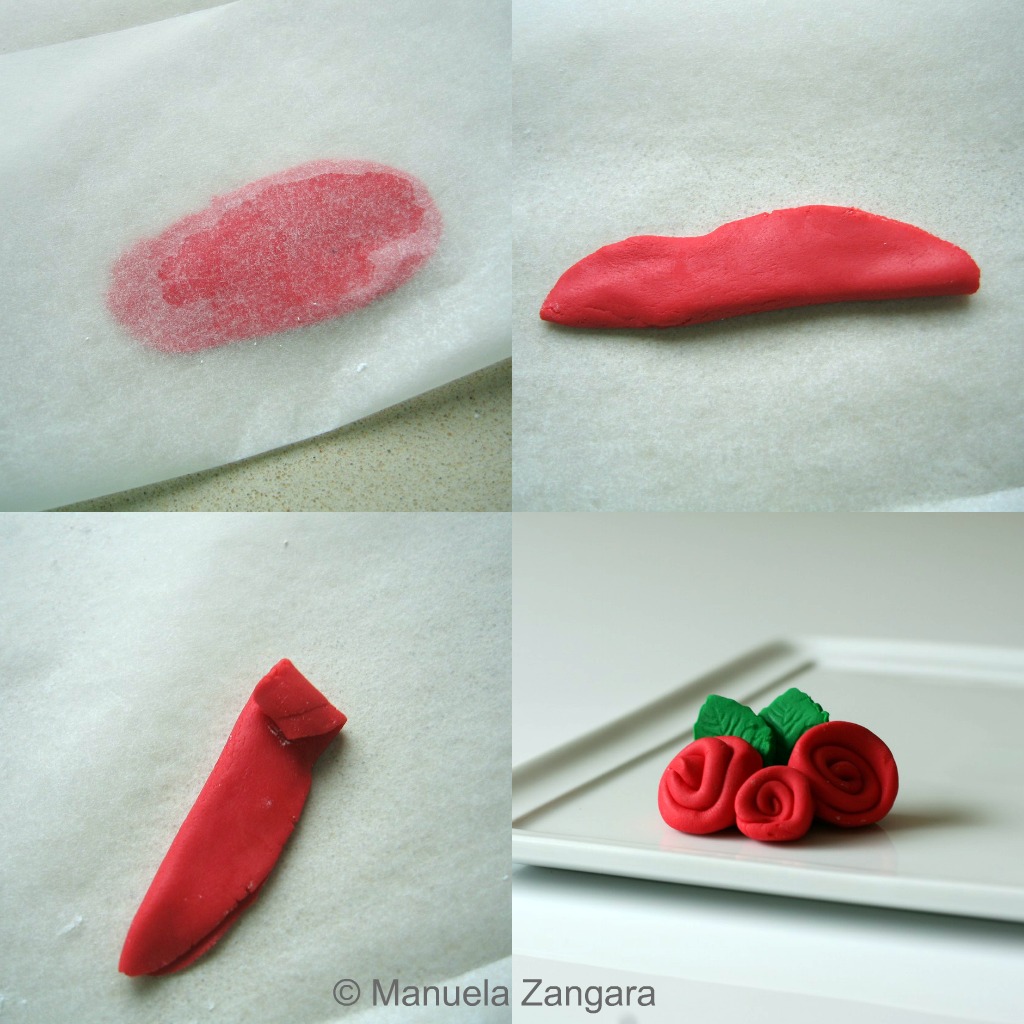 Attach it on Dorothy’s hat using a little bit of water.

Repeat for all the remaining cake pops.  Let them dry well on a piece of Styrofoam before serving. 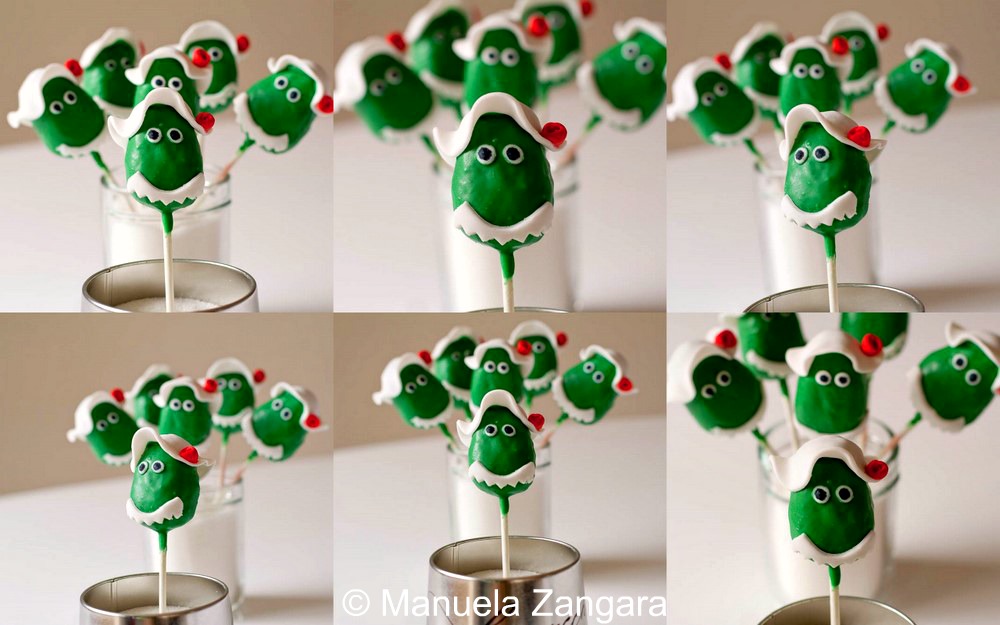 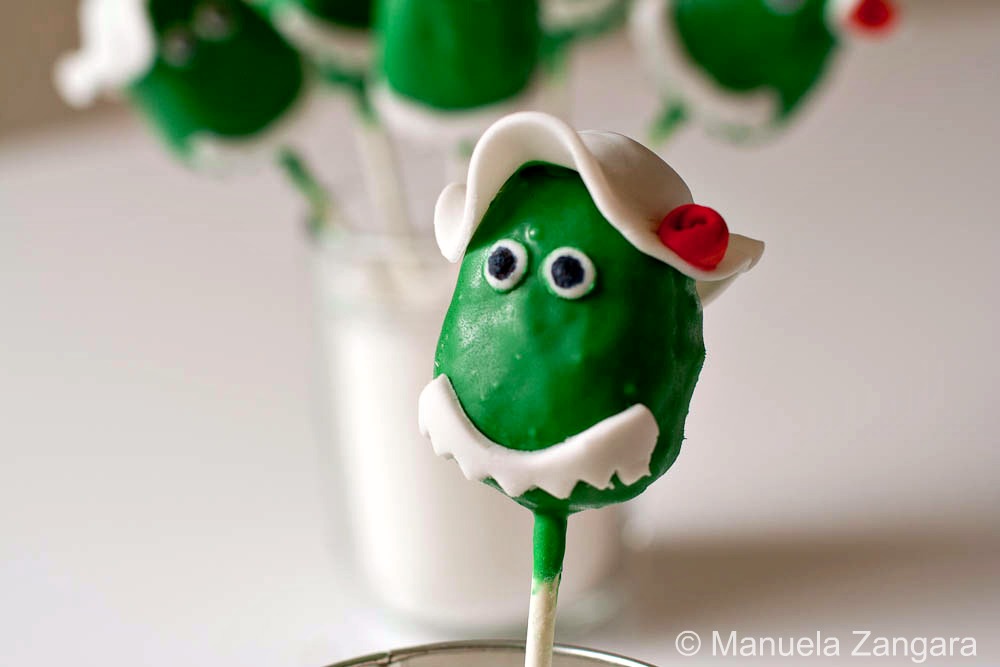