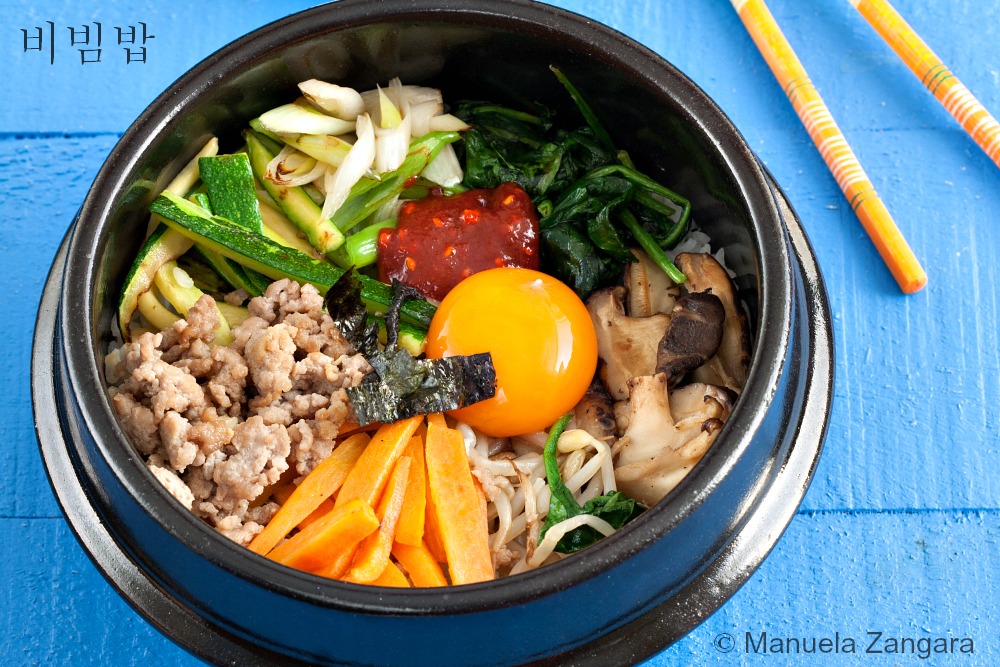 The July Daring Cooks‘ Challenge took us to Korea, where Renata of Testado, Provado & Aprovado taught us to make bibimbap. This colorful rice dish can be customized to meet any taste, and is as much fun to eat as it is to say!
Bibimbap (비빔밥), which literally means “mixed rice”, is one of Korea’s most famous dishes and it is made up of steamed rice topped with stir fried vegetables, meat and a fried (or raw) egg and everything gets mixed together just before eating.  It is traditionally served in individual sized bowls and the way the toppings are arranged in a chromatic circle make for a spectacular view.  The trick behind a beautifully composed bibimbap is to arrange similar coloured ingredients opposite to each other, so as to create an immediate visual impact.  An easy dish that looks like a masterpiece!  I like the sound (and taste!) of that!
Bibimbap is usually a spicy dish as it is served with a sauce made with a Korean red pepper/capsicum paste called Gochujang (고추장). You can definitely adjust the spice level to your liking.
A variation of the classic bibimbap is Dolsot Bibimbap.  In this case, the dish is assembled in individual sized stone pots coated with a bit of sesame oil. After that, the pot is heated on the stove top until it sizzles and makes a thin layer of crunchy rice at the bottom.
I had never eaten bibimbap before this challenge, but I live in a suburb with a huge Korean community, in fact, my next door neighbours are Korean!  So, I thought this would be a fantastic opportunity for me to try and cook some Korean food!  I also knew that, for once, finding the right ingredients would be easy, as I am surrounded by amazing Korean shops!  Even though I did not find a dolsot (stone pot), I did find a beautiful ttukbaegi pot that worked perfectly well for this dish.  And, as I had thought, I easily managed to find all the ingredients I needed, also thanks to my friend Victoria who gave me the names in Korean. 🙂  I will leave you to it… Bibimbap! 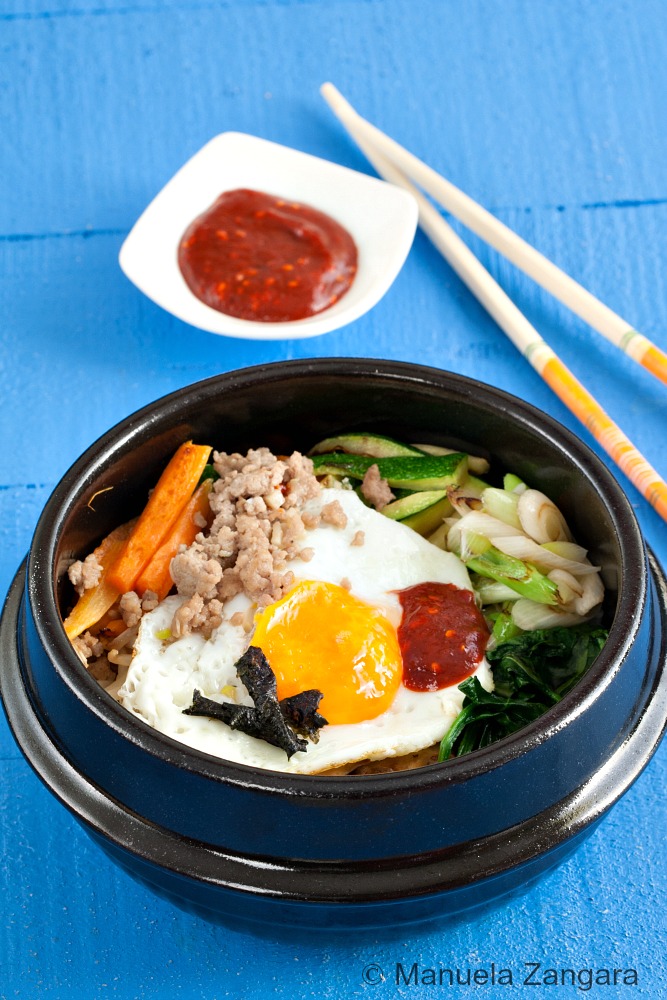 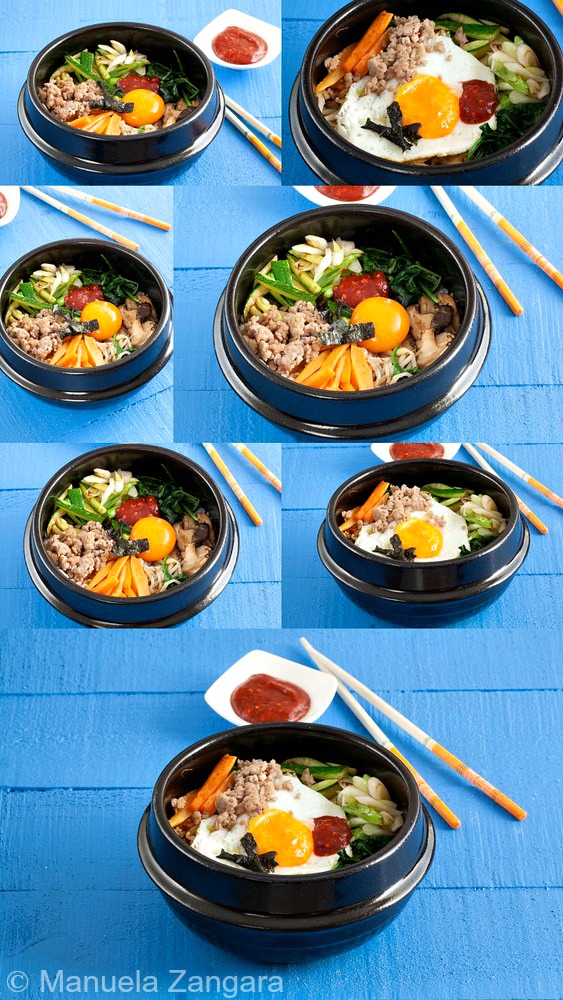 Bibimbap - a traditional Korean dish made with rice, vegetables, meat and egg.

The vegetables can be substituted according to seasonal availability or your preference. You can also use lettuce and cucumber, raw.  Try to use a colorful selection of vegetables to make your dish more appealing and healthier.

Vegetarians may omit the meat or use grilled tofu as a substitute. 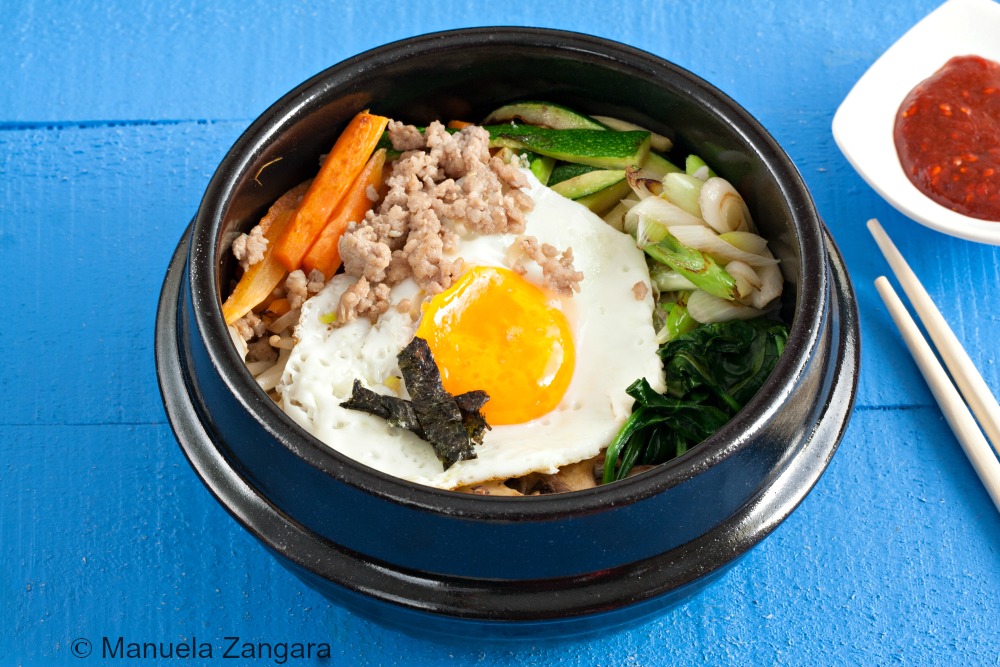 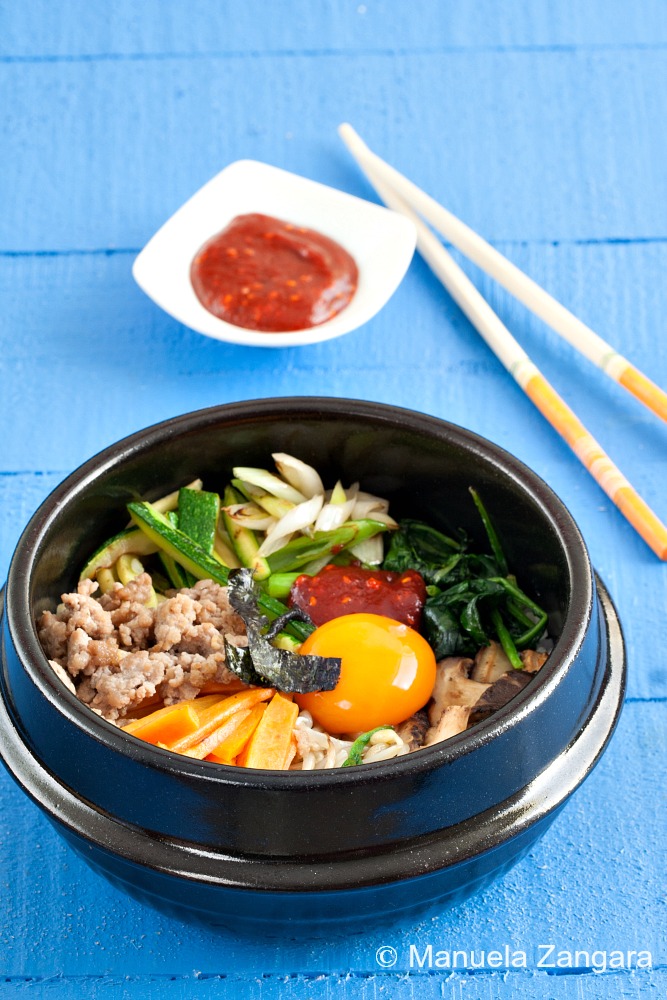