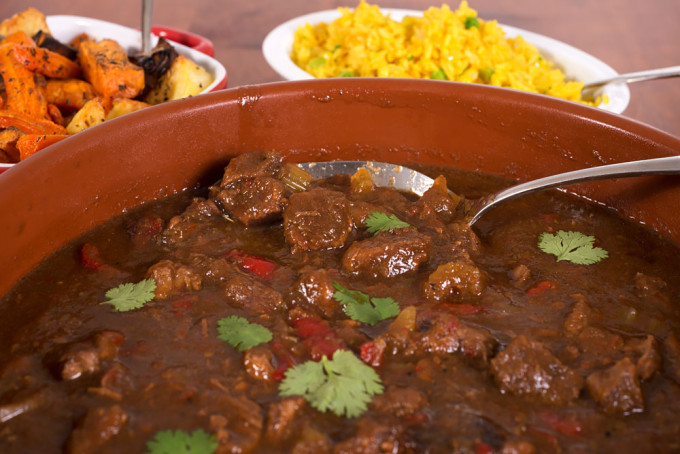 As you know, I am travelling at the moment, so I thought of asking some of my favourite food blogger friends to come over and share some of their amazing creations with all of you!  I told you I would leave you in great company, right?  Today I have the honour of having yet another one of my dearest friends on Manu’s Menu: Maureen from Orgasmic Chef.  Maureen is a fantastic person and a very talented blogger.  Her site is one of the top food blogs in Australia and I feel very fortunate to have her here today!  Make sure to check out her beautiful site, I am sure you will find lots of delicious recipes to bookmark and make!  So… ready to find out what amazing dish she has prepared for us?  Here we go!  Thanks Maureen!

As Manu and her family are traveling around the world, making memories with their children to last a lifetime, I’m sitting at home cooking this really wonderful South American lamb stew. Now, I’ll be honest and admit to you right now that it might not be South American but it could be.

You see, my husband and I went to a local South American restaurant last week and one of the first small plates we were served was an amazing lamb stew served with yellow rice. Normally when I go to a restaurant, I never finish anything but this dish? I could have licked it clean with my tongue. I didn’t, but only because the restaurant was full.

I came home and scoured the net for South American lamb stew so I would have a starting point and I found one but it’s not the one from the restaurant. This stew is cooked in a refrito of red onion, green capsicum, chile, garlic and tomatoes along with beer, cloves, allspice and seasoning. To make it even more special, I made some shallot confit roasted in olive oil and tossed them into the stew near the end of the slow cooking which took 8 hours. I didn’t want to toss out that wonderful olive oil so I used some to coat root vegetables and garlic and roasted them. The recipe called for ground achiote and I couldn’t find any up here in the sunny north so I substituted by tossing in some ground cayenne pepper. I’m sure it would be better with the real deal. I also didn’t have any panela or pilloncillo so I used dark brown sugar instead.

I served this alongside yellow rice. I sauteed an onion in a little bit of butter, added a bit of salt and a teaspoon of turmeric and the kernels from 2 small ears of corn. Then I put rice in the rice cooker and just before it was done, I poured in the onion and corn mixture and a handful of frozen peas. When it was done, I tossed in some chopped coriander (cilantro) and some sliced green onion tops. As a garnish I peeled and sliced two bananas and fried them in a little butter. I didn’t photograph them because really, have you ever looked at a grilled banana? The taste went so well with the lamb in spite of the look. « Lemon Delight in a Jar
Tsukune »