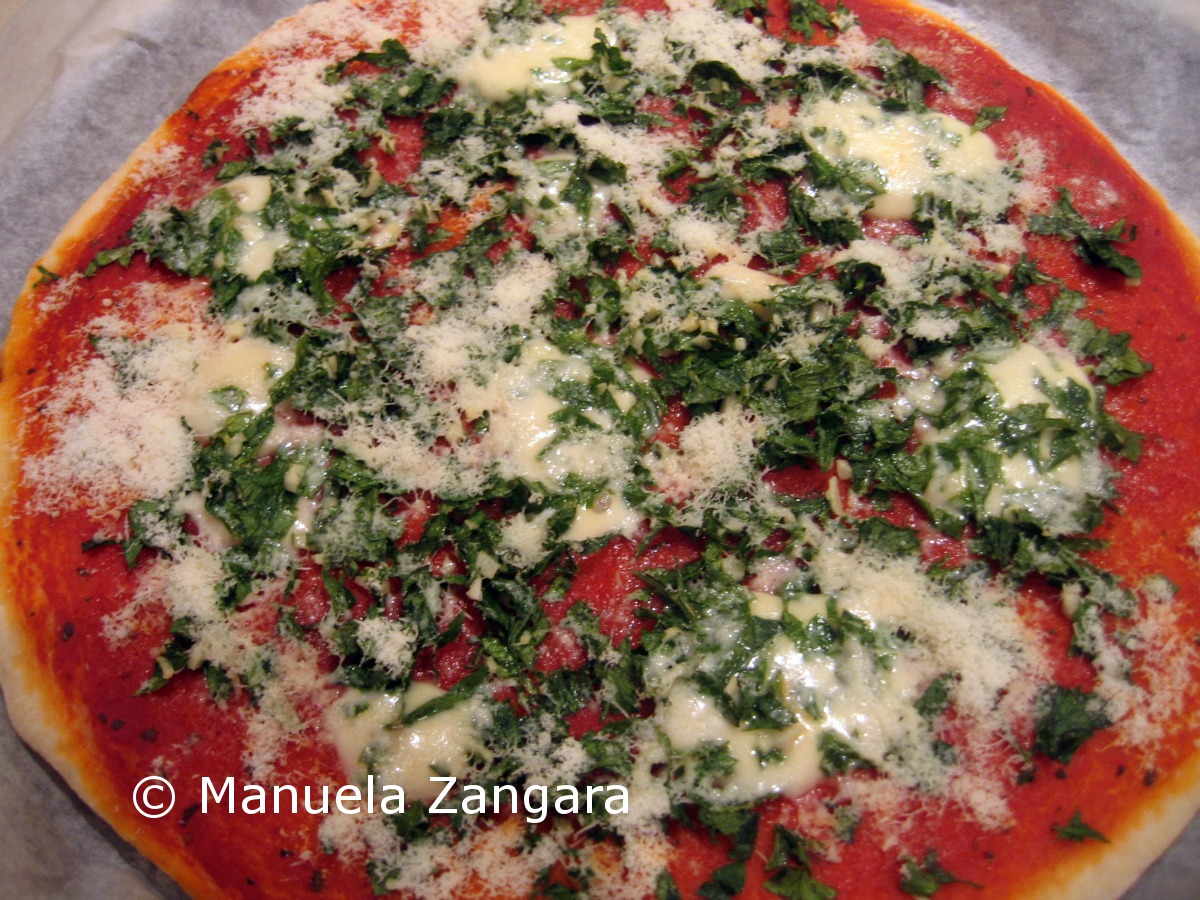 A while ago I published the recipe for sfincione, which can be considered to be the pizza of Palermo.  Today I am going to give you the recipe for the pizza from Trapani: rianata.  There are a few versions of this pizza, some are made only with oregano (the name rianata comes from origanata which means “with oregano”), some have anchovies, some have mozzarella, some have parsley… you get my point.  This is the version I like the most and that I usually make at home.  I use both oregano and parsley with mozzarella but without anchovies.  I make it either thin (like a regular pizza) or thick (like a focaccia).  This thick version reminds me of when I was a child and I used to go visit my grandparents in Trapani.  Just around the corner from their house there was a bakery called “Messina” that used to make amazing bread, biscuits and savory treats.  Thick rianata was one of them.  We sometimes used to call the shop and order a few rianate.  When they were ready, they used to call us from the street and we would lower a straw basket from the balcony.  The shop boy would put the rianate inside the basket and we would pull it up.  As strange as it seems, this used to be a very common practice and the straw basket was used for many different items… it was very practical and LOTS of fun for a child visiting from a big city like Milan, where such things were just unthinkable!  🙂  Anyhow, here goes my rianata recipe.

Pizza dough for 4 persons as per the instructions on How to make pizza dough. 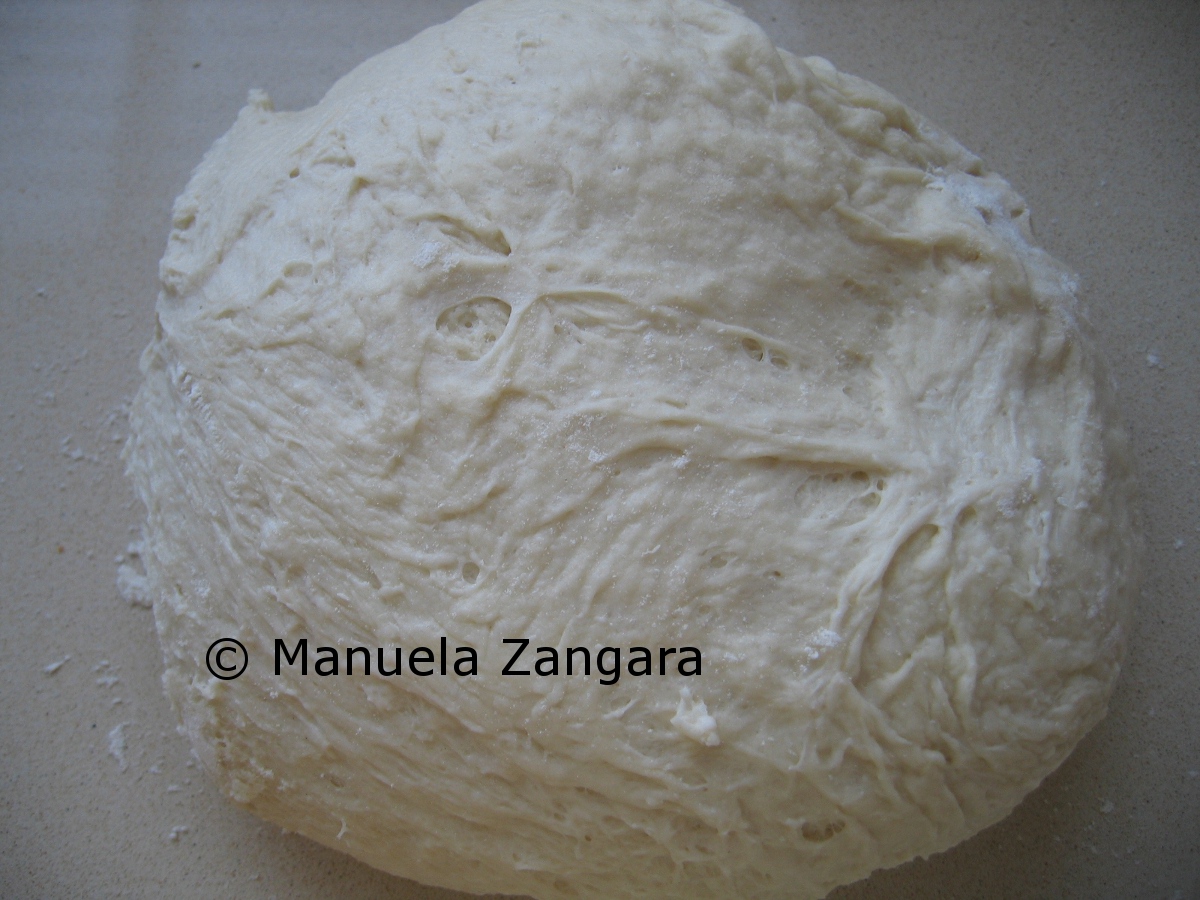 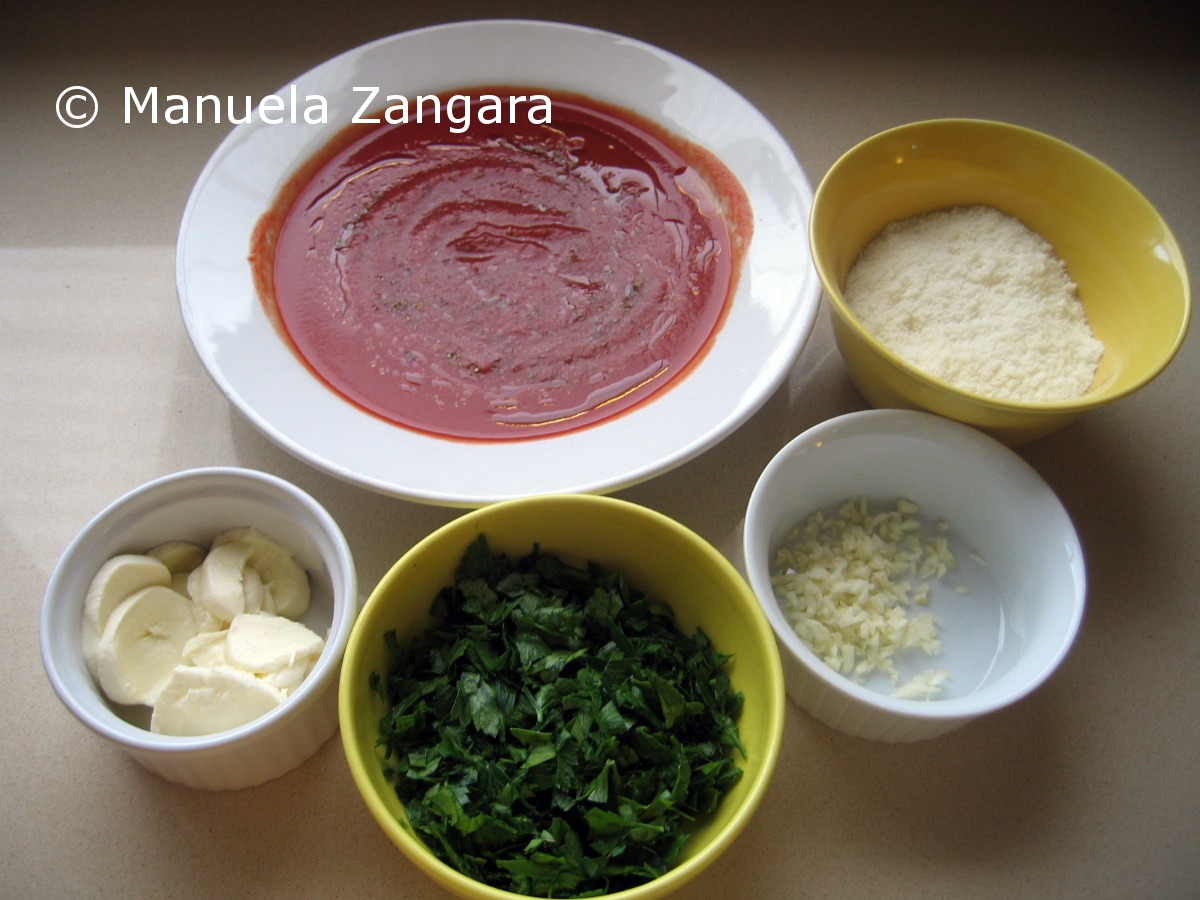 While the dough rests, prepare the toppings: chop the garlic and parsley, slice the mozzarella and grate the Pecorino Romano.  Prepare the tomato base by mixing the tomato puree with 2 tbsp of extra virgin olive oil, 1 tbsp of oregano and salt to taste.

As I said before, there are 2 ways of making rianata: there is the thin pizza version and there is the thick focaccia version.  I like both of them and you can find both methods below.

THICK VERSION:
When the pizza dough is ready, put it in an oven dish (or in individual oven pans) with a little oil at the base and flatten it with your hands until you get a sheet approximately 1.5 cm thick. 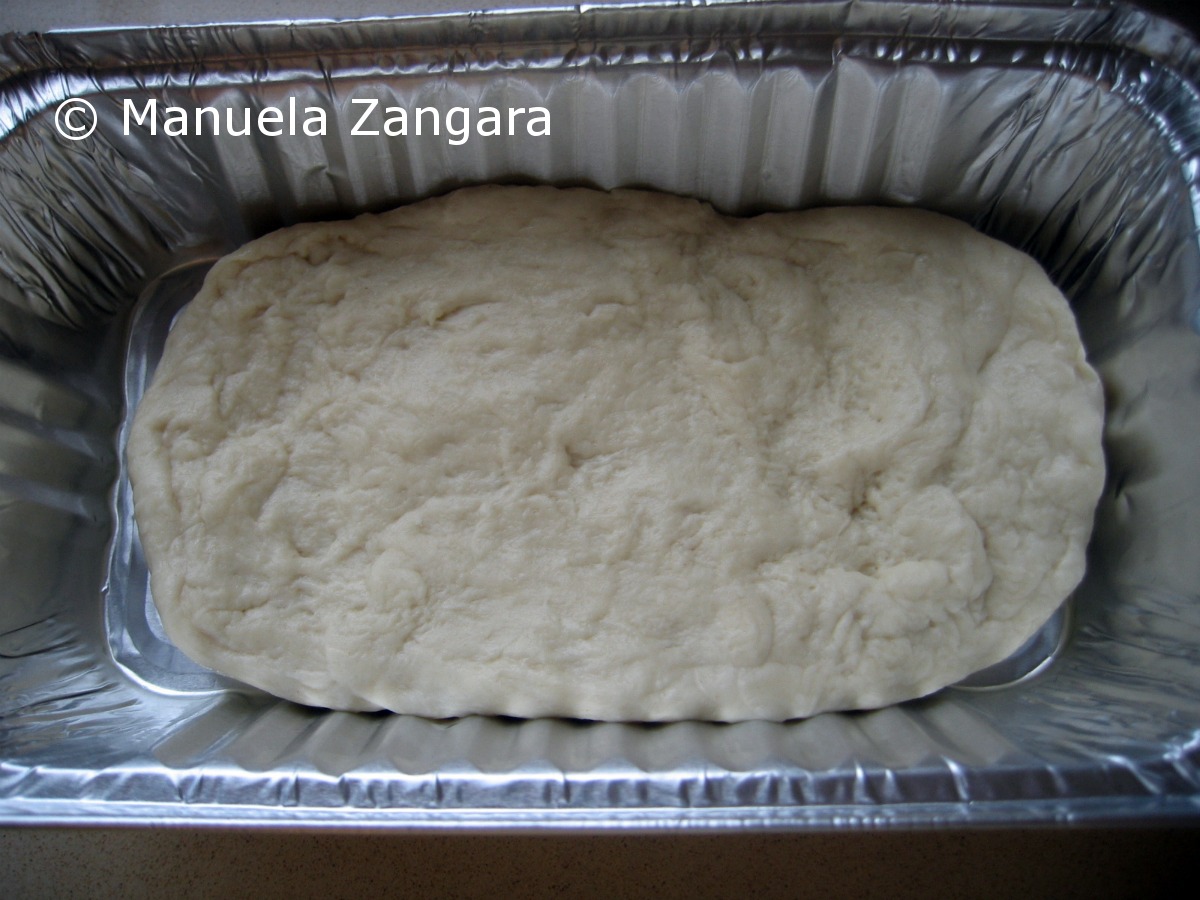 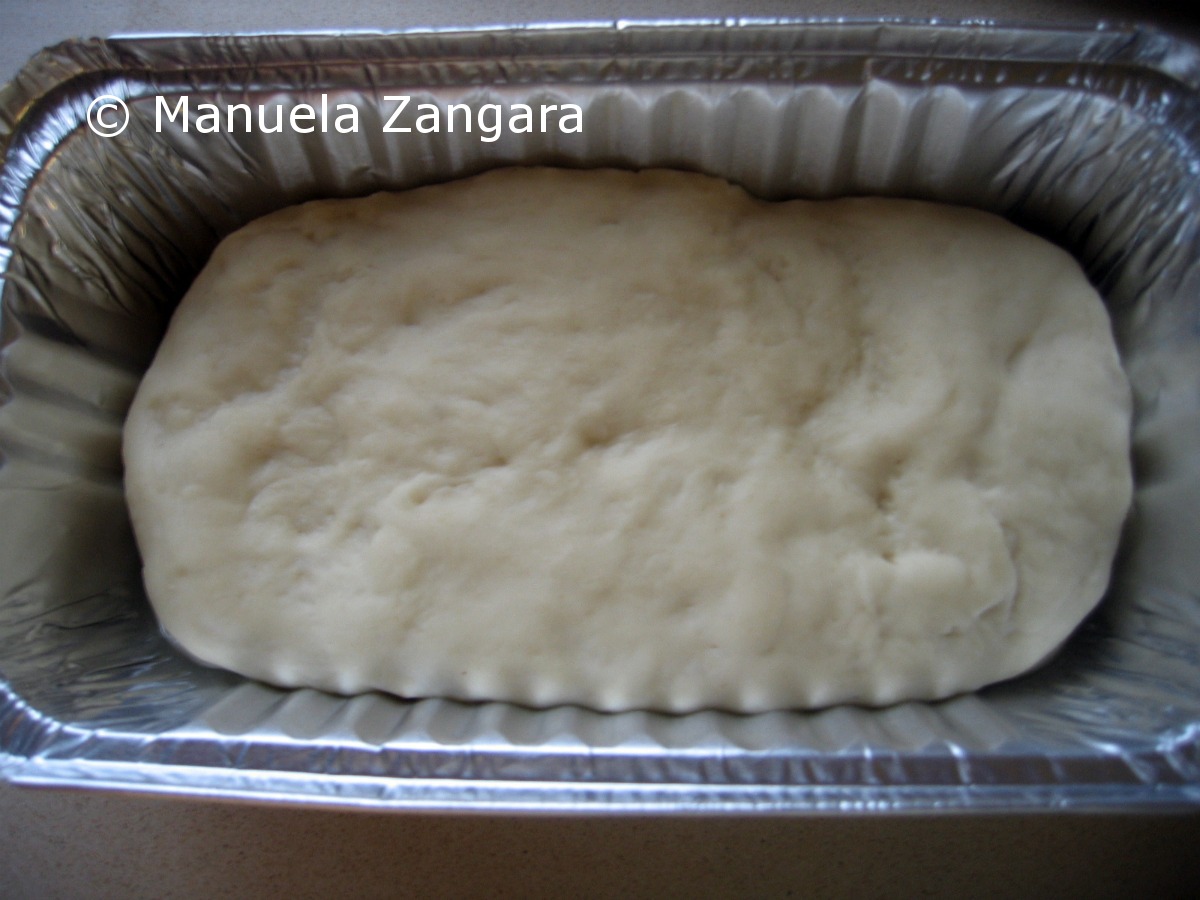 THIN VERSION:
When the pizza dough is ready, divide it in 4 and roll it with a rolling pin into 4 circles approximately 0.5 cm thick.

This version does not require the extra rising time. 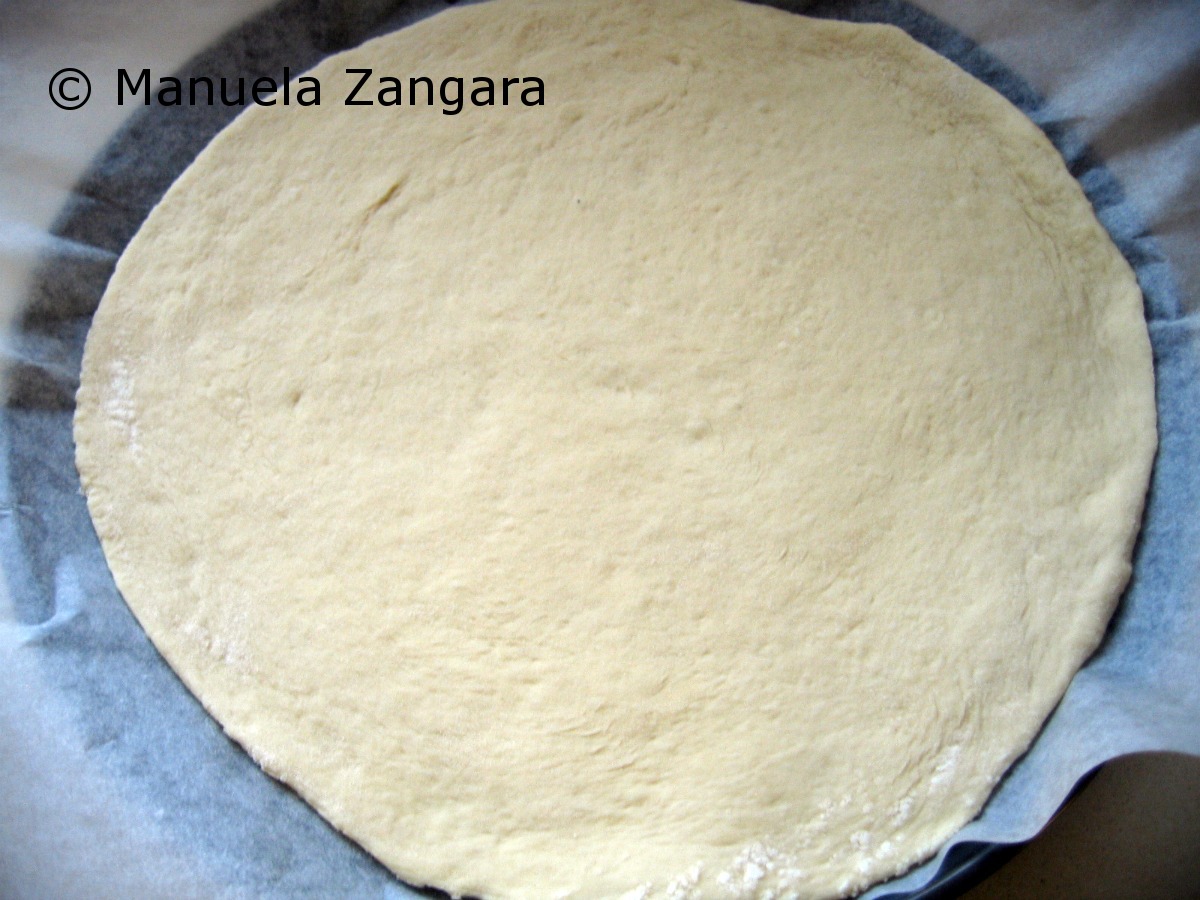 BOTH VERSIONS:
Now put the tomato base and bake in a preheated fan forced oven at 180°C for 15 minutes (for the thin version) or 40 minutes or until cooked through (for the thick version). 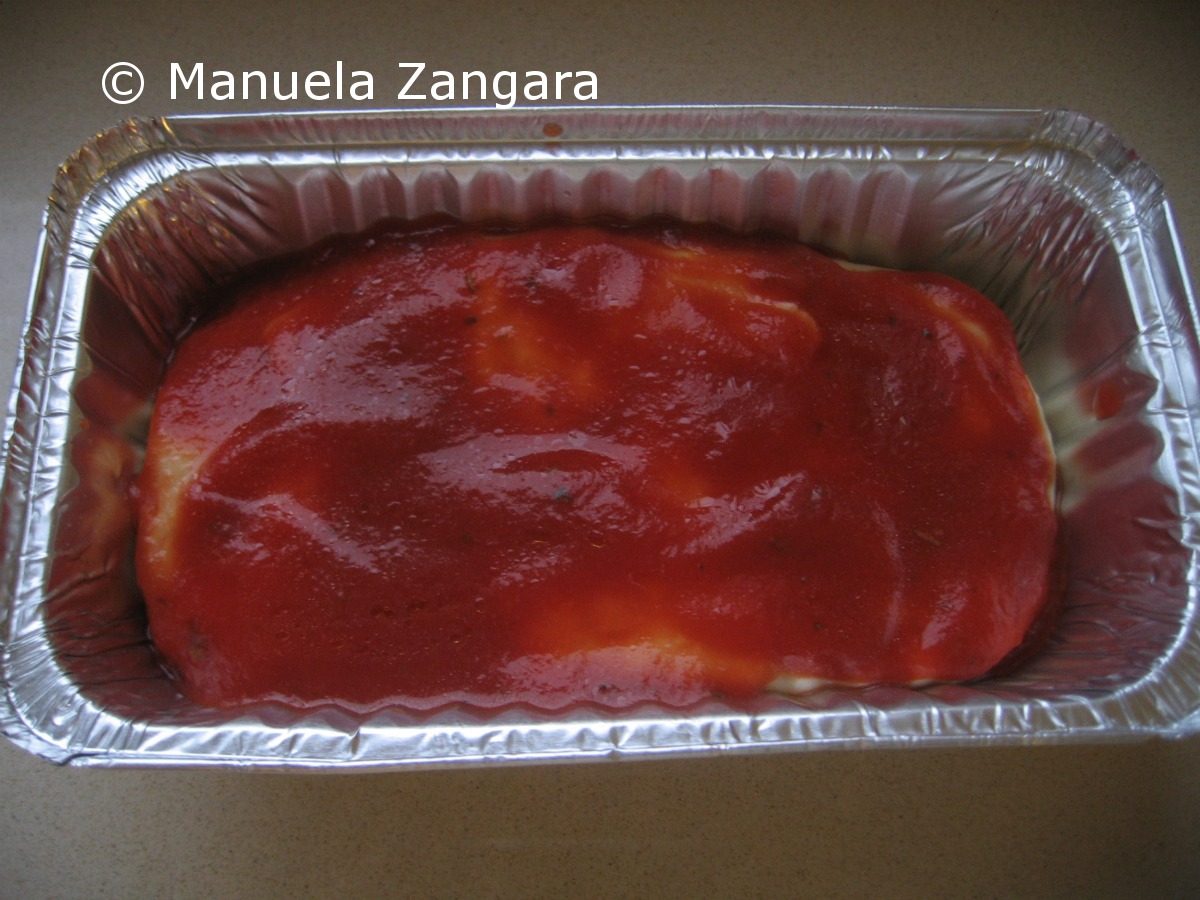 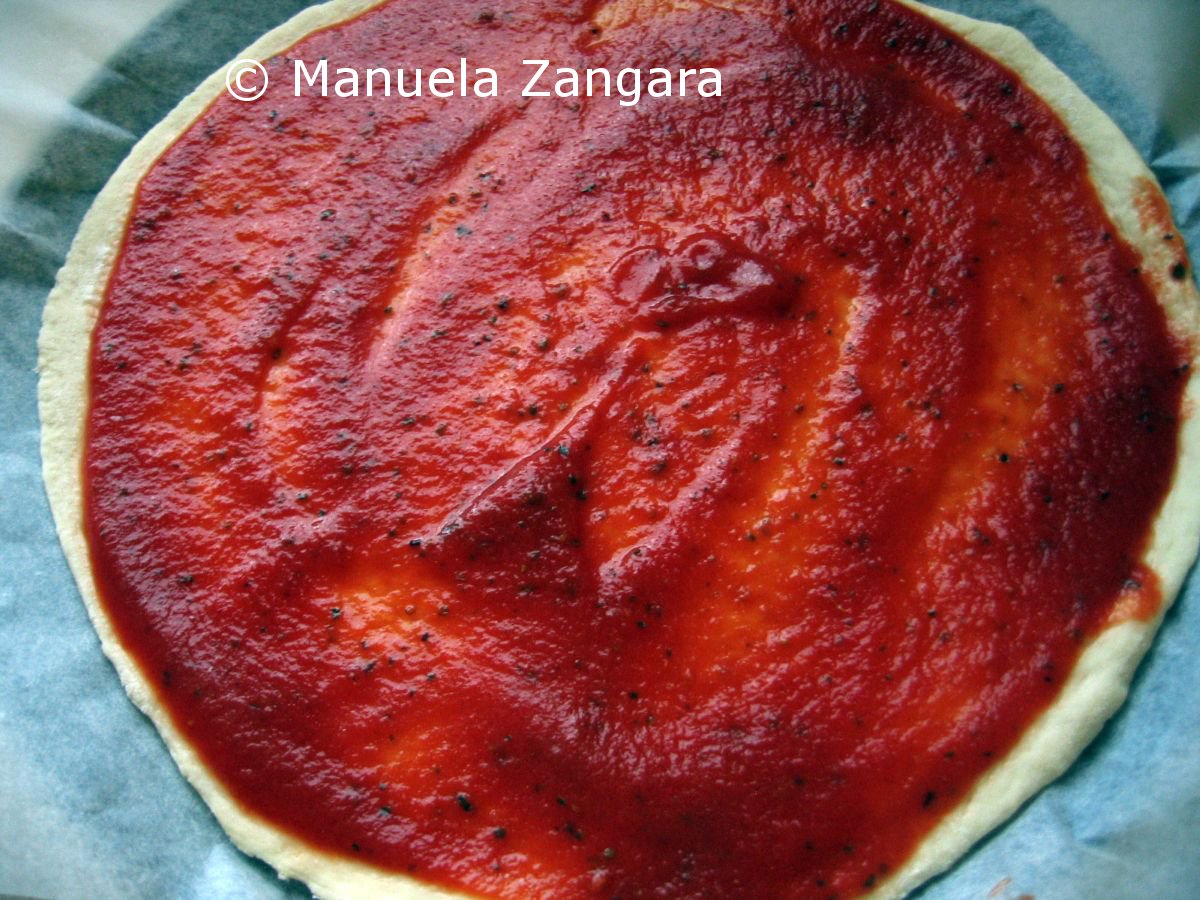 Take out of the oven and put the toppings.  Put the sliced mozzarella first, then add the garlic and parsley and at the end sprinkle the grated Pecorino Romano on the top. 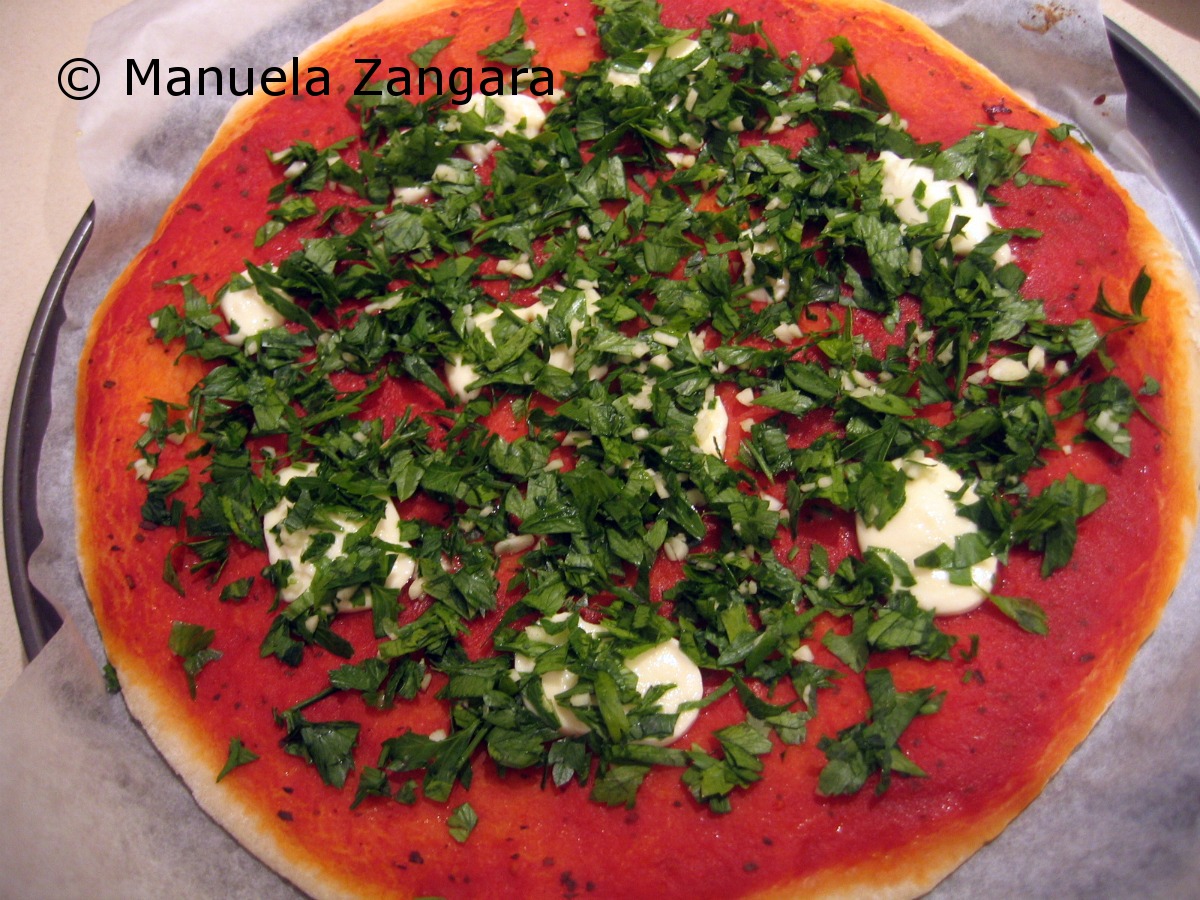 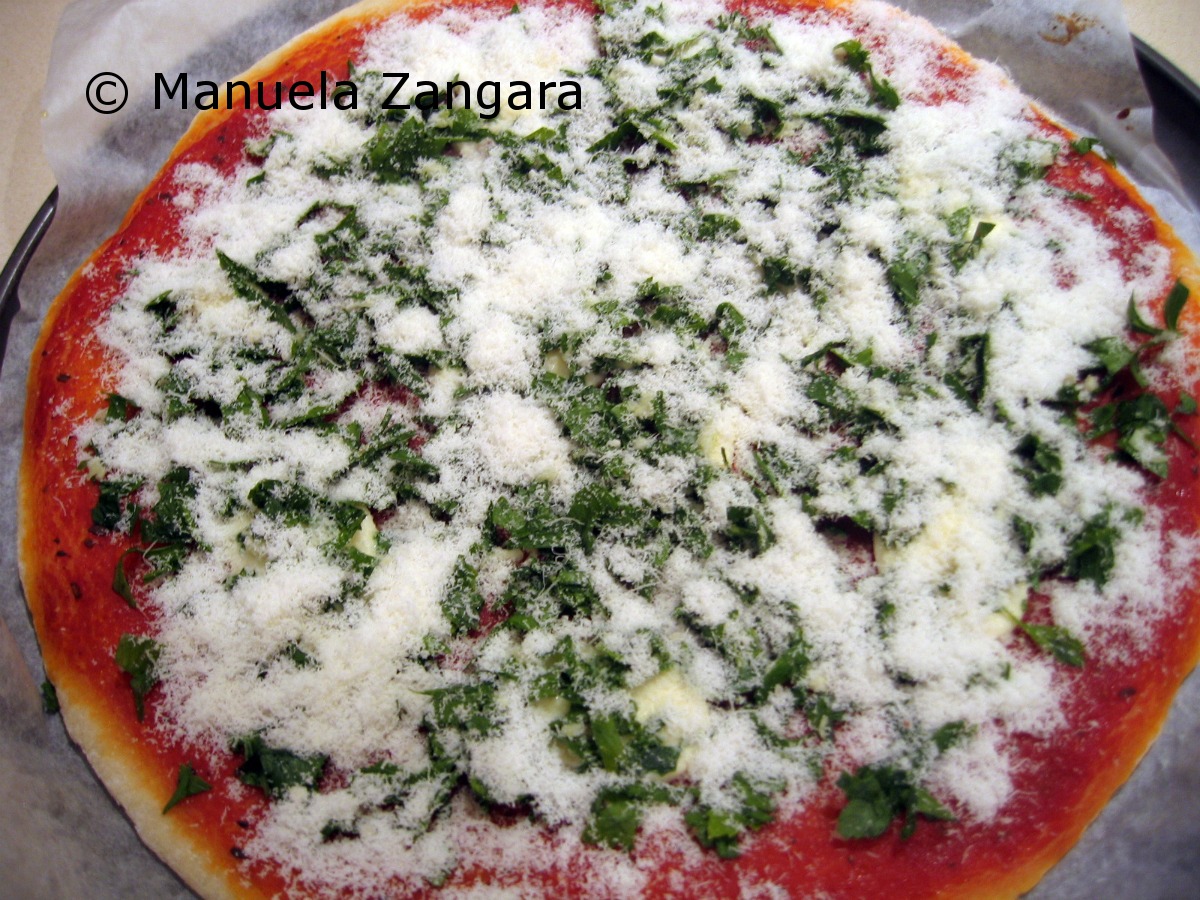 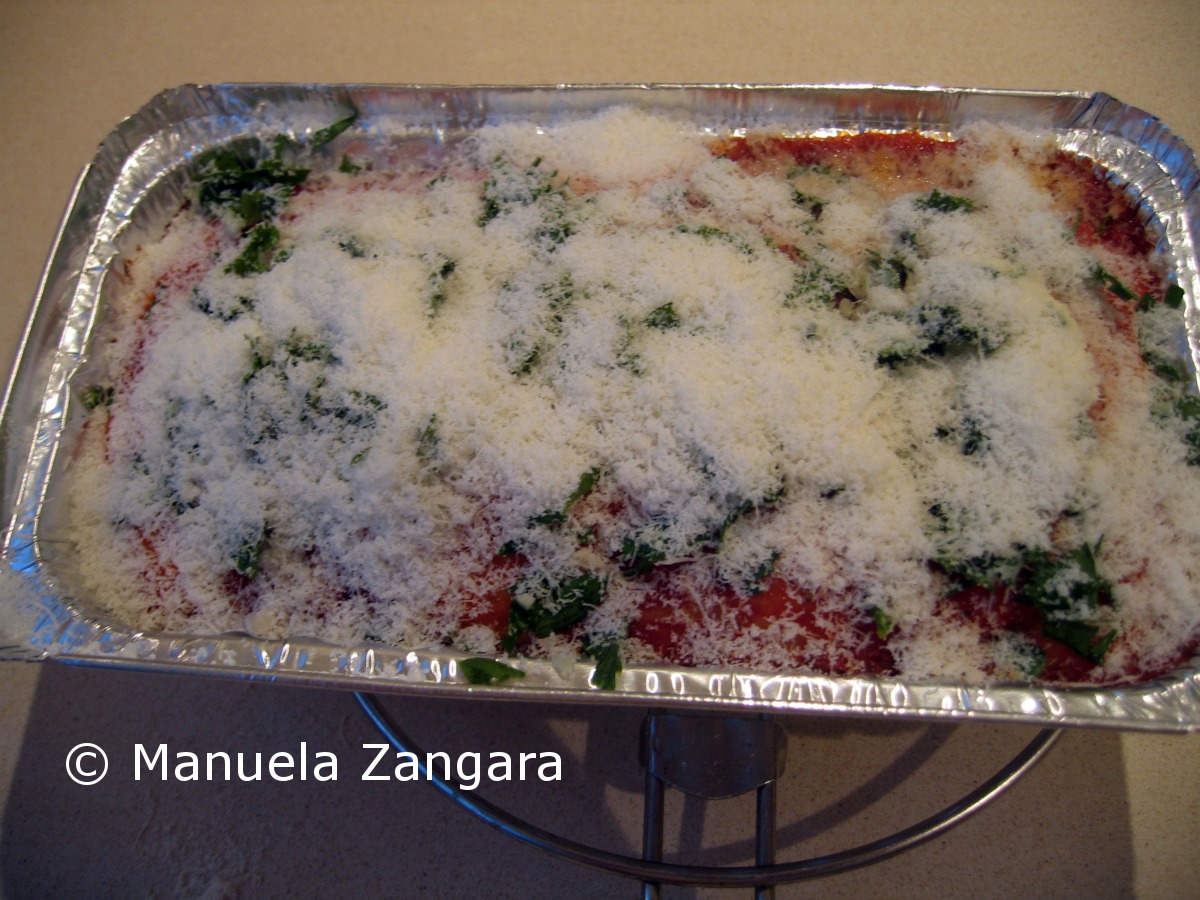 Put the rianate back in the oven for 5 minutes or until the cheese has melted.

When ready, drizzle with a little extra virgin olive oil on the top and let them cool for a few minutes.  Cut and serve. 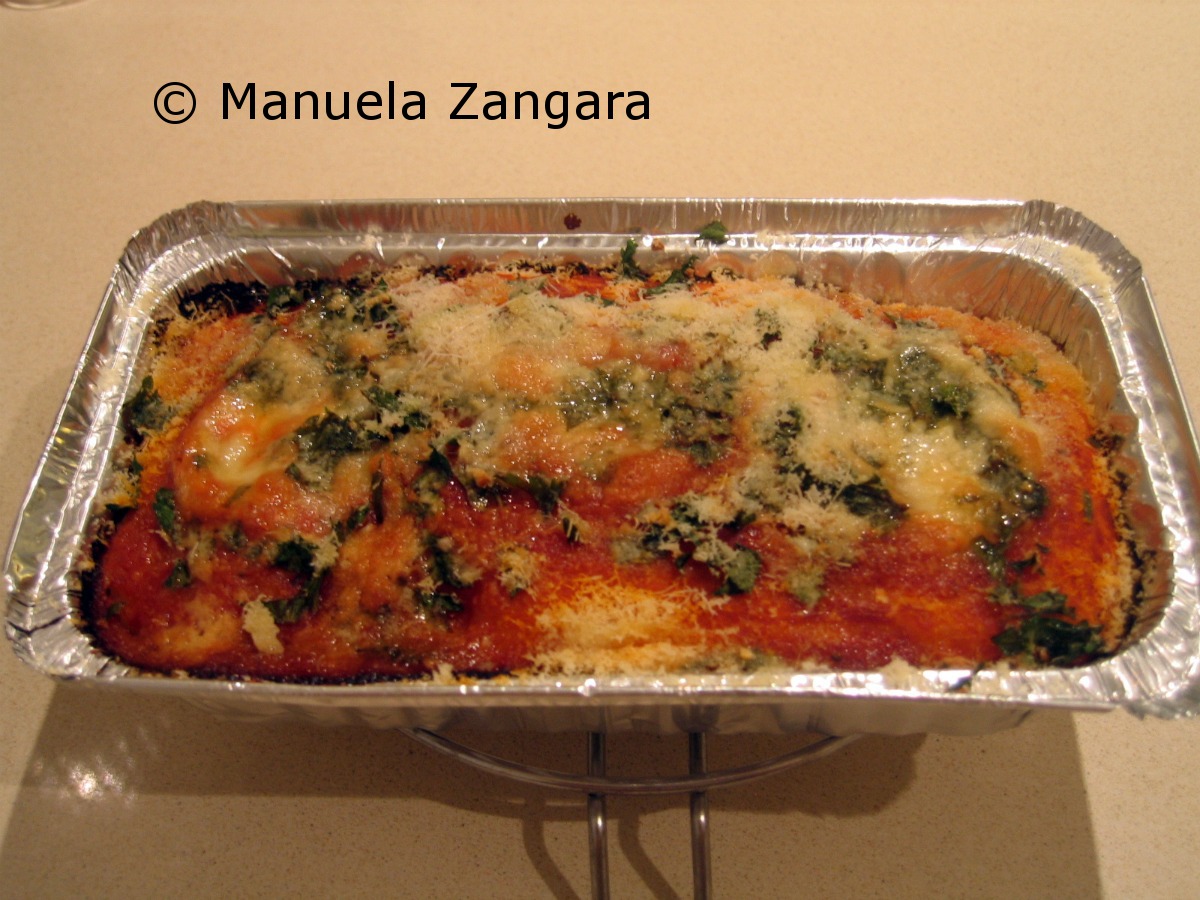 NOTE: Rianata is just as good the day after.

PS: We are back from our holiday in New Zealand.  We had a great time and in the next few days I’ll be working on a page on New Zealand that I will publish under the Out and About section of the site.  I am looking forward to being able to share some of the pictures we took there.  New Zealand is a fantastic place and the food was amazing!  I know I have A LOT to catch up with… I promise I will get back to all of you ASAP! 🙂